WARNING! The content on this page may be offensive and disturbing to some viewers. It talks about and shows video footage of animals being mistreated and slaughtered inhumanely. I advise children under the age of 16 not to watch it unless accompanied by an adult.

I myself cannot even watch the video footage that is posted on this page, and I cry as I try and write some this text, however I thought I would post this information for those who wanted to open their eyes, and know what REALLY happens on the "inside". A "Slaughter" house is precisely that. Animals are mistreated and slaughtered everyday and most people continue to close their eyes and eat their steak.

Yes, some animals on farms can be treated very well, however when it is '"their time" these animals are sent off to the slaughterhouses where they are mistreated and tortured.

It's surprising the amount of people that have no idea what it is they are eating or the amount of people that choose to ignore the reality of what they put into their mouths. It's also amazing to see that people that care about their health, the environment, poverty and animal cruelty still eat meat. The reason I mention this is because what most people do not know or remain ignorant to, is that the production and consumption of meat is a major cause of health issues, environmental issues, poverty and animal cruelty.

Linda McCartney said, "If a slaughterhouse had glass windows, nobody would eat meat". And this is true. What happens behind those walls would shock you, and on this page a small part of that reality will be exposed. You can choose not read on if you wish but I highly recomend taking the time to know the truth about slaughterhouses and what is REALLY going on.

In factory farms mother pigs are in small confined metal cages that are so small they cannot even turn around and they can suffer from depression and boredom. Pregnant mothers are moved to an even smaller cage, called a farrowing crate, where they are left for four months unable to move. Here, she is forced to have her babies on a hard concrete floor, and despite a mothers natural instinct the sow is unable to move to nurture her newly born babies.

Soon after birth the piglets undergo surgical procedures without any pain relief. Their tails are cut off, they are castrated (male calves are castrated also) and their teeth are cut or ground out. Then, at only 4-6 months old, they are taken and locked up in crowded enclosures with other pigs, forced into trucks, and sent off to the slaughter house to be killed.

Sows do not survive more than two years on a factory farm. One in ten die every year, with many more being killed due to lameness, injury, or because they can no longer fall pregnant. Over 61% of mother pigs are replaced on factory farms every year. 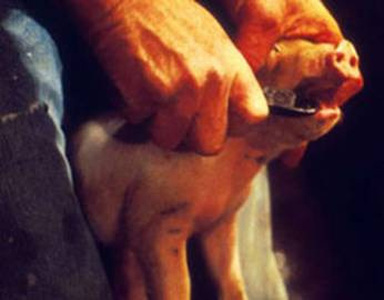 Around 11 million chickens in Australia are locked in tiny wire cages, called battery cages, with up to five other hens. "Barn laid" laying chickens are forced to live with tens of thousands of othe birds in a windowless shed.

These chickens, including "free range" chickens, have their beaks cut off with a hot blade, and without an anesthetic. No matter what the system, at about 18 months chickens egg production slows down and are no longer useful to egg companies. The "spent hens" are then thrown into a truck without care, transported and killed - then replaced with four month old chickens, who will undergo the same fate in only 14 months time.

At hateries where laying hens are bred, the male chicks live a very short life. As they are not 'profitable' chicks, they are gassed, ground up alive in a macerator and/or thrown into the dumptser alive.

Male chicks in a Macerator 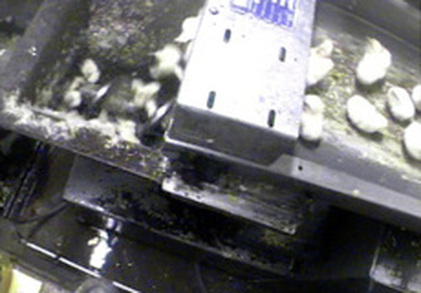 Although organic and free range egg systems provide more space for chickens - and do not de-beak their birds - they still kill them in the end, and "spent hens" and "male chicks" end up victims of a profit driven industry.

Roughly 29 million cattle are in Australia. A majority of these animals are raised for food, however the rest live in a continuous cycle of reimpregnation and milking until they are slaughtered. Cows naturally live up to 20 years though dairy cows rarely live to see past the age of seven.

Calves, including ones raised for dairy, suffer painful procedures, and again, this is done without any pain relief. These procedures include: branding, disbudding (where the sensitive horn tissue is scraped out of their skulls with a knife or scooping implement), de-horning, tail docking and, for male calves, castration.

A factory farm for cattle is called a "feedlot". Cattle can spend up to a year in these places before they are slaughtered as "grain fed" beef. Approximately nine million cows are killed for meat in Australia every year. These animals are packed into trucks without any room to move and can face many hours without food or water as they are transported to slaughter houses.

Humane practices require for animals to be stunned before they are slaughtered. This means a metal bolt is shot into their skull and then retracted. This is suppose to render the cow unconcious, however a big struggling cow is not easy to stun, and often they miss, repeating the  painful process until the cow is unconcious. But time is money, and sometimes they do not repeat the process, so the cow is completely concious as they endure the excruciating pain of being slaughtered.

Hogs are stunned with an electric device, and when panicked, are also difficult to hit. If the jolt is too high then the hog ends up bruised and this ruins the meat so often the jolt is too low and doesn't properly "knock out" the hog. So whether or not the hogs and cows are stunned, their throats are cut - and before they have a chance to bleed to death, they hung up by their back legs and sent to the "skinners" to have their skin peeled off from their bodies starting at their heads.

Often cows and hogs are kicking and screaming, feeling everything. Pigs are often put into boiling water sometimes still alive, and as they struggle for their life, they are pushed down into the water, where they are left to burn and drown to death.
Factory Farm Animals - "Jackie O's Factory Farming PSA"
More videos from Animals Australia

NUMBER OF ANIMALS KILLED BY THE MEAT, DAIRY AND EGG INDUSTRIES COUNTER

Below is the number of animals killed in the world by the meat, dairy and egg industries, since you opened this webpage.
0 chickens
0 turkeys
0 ducks
0 pigs
0 cattle
0 sheep
0 rabbits
0

This counter does not include the billions of fish and sea animals killed annually.

(Get this counter)
All references to images, video and information can be found on the"Reference" page.